Star Trek began in the early 1960's as an idea in the mind of Gene Roddenberry, a World War II veteran and former L.A. policeman who had become an established television writer/producer and was determined to bring his vision of a serious, thoughtful science fiction drama to the air. Pitched as "Wagon Train to the stars," Star Trek, after a few false starts, became a reality in 1966 in primetime on NBC.
40 Years later, four more television series, 10 theatrical movies, hundreds of books and magazines, and innumerable Internet fan sites Star Trek Lives on. This November, Rittenhouse Archives will release Star Trek: The Original Series 40th Anniversary Trading Cards covering the first season of the show that started it all as well as the original pilot "The Cage".

Each box of this set will feature 2 Autograph Cards in the fan favorite classic design. Signers for this commemorative set include: 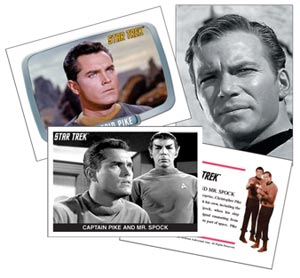 Fans and collectors will also be able to store their collection in a custom designed collector's album which contains an exclusive autograph card of Walter Koenig as Mirror Universe Chekov and an exclusive promo card.