Following up on 2007's and 2008's SOLD-OUT "Star Trek: The Original Series 40th Anniversary trading card" sets, comes 2009 Star Trek: The Original Series featuring all of the same unique designs and card-stock from our previous set, but focusing on the ground-breaking second third of the original series of Star Trek.
Each box of this set will feature 3 Autograph Cards in the fan favorite classic design. Signers for this commemorative set include: 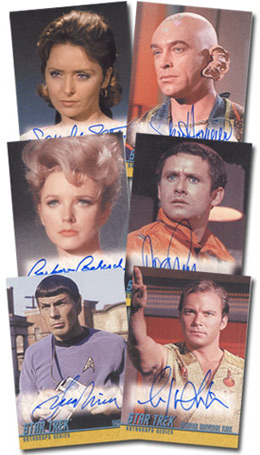 Rounding out the chase cards are several exciting sets including : For every three cases purchased of 2009 Star Trek: The Original Series Trading Cards you will receive an Exclusive Autograph/Costume Card signed by Walter Koenig as Chekov. For every six cases purchased you will receive an Exclusive Dual Autograph Card Signed by William Shatner (Captain Kirk) and Nichelle Nichols (Uhura) in "Plato's Stepchildren"!