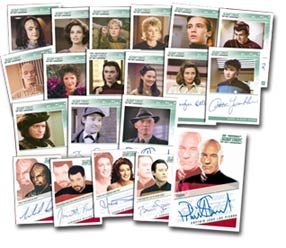 
Collectors should also keep their eyes out for several dual autograph cards randomly inserted into the packs. Each card is a limited edition of only 200 each! 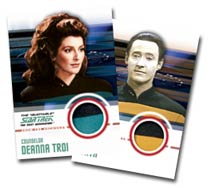 Rittenhouse Archives has also acquired authentic Star Trek: Next Generation costumes to be used on 9 different costume cards. Each member of the bridge crew is represented in this set. Bonus cards for this incredible series include:

A Custom-designed album to store the entire collection, including plastic pages, bonus promo card and an exclusive autograph card signed by Marta DuBoise as Ardra will also be available.

Below are images of the some of the costumes used for this set.