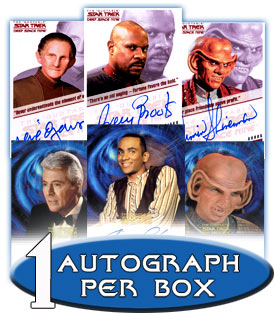 Also included are a bevy of guest star autographs on the fan favorite autograph card design seen in the The Complete Deep Space Nine set. These signers include

Rittenhouse Archives has also acquired authentic Star Trek: Deep Space Nine costumes to be used on over 20 different costume cards. Each staring cast member of the show is represented in this set. Also included will be two relic cards made from two different banners that hung on the Promenade set for all seven seasons!

Bonus cards for this incredible series include:

A Custom-designed album to store the entire collection, including plastic pages, bonus promo card and an exclusive costume card featuring costume material of the character The Grand Nagus.