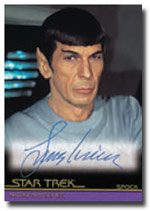 Fans and collectors will also be able to store their collection in a custom designed collector's album which contains an exclusive autograph card of James B. Sikking as Captain Styles in "STIII: The Search For Spock" and an exclusive promo card.