Rittenhouse Archives is pleased to once again bring collectors the next exciting stage in Star Trek trading card collecting with Star Trek Enterprise Season Four Trading Cards. Each box will contain 40 packs with 5 cards per pack. The 72-card base set will cover all 22 season-four episodes with complete plot synopses and exciting imagery.

Again, we are happy to present collectors with TWO AUTOGRAPH CARDS PER BOX! Rittenhouse has done it again by bringing collectors what they want and that is top signers on an all-new autograph card design. This year's set includes autographs from show stars Jolene Blalock (T'Pol), Linda Park (Ensign Hoshi Sato) and Anthony Montgomery (Travis Mayweather). Rounding out the autographers are numereous recurring guest stars including: with more autographers to be announced in the coming weeks.

As an added bonus, each box will also contain 1 COSTUME CARD PER BOX! We have acquired a fantastic line-up of costume cards for this series including:


Also randomly inserted into boxes of the Star Trek Enterprise: Season Four Trading Cards will be several exciting bonus sets, including Genesis cards, In a Mirror cards and Archer In Action cards. The 9-card dual-sided Genesis cards, found one in every 20 packs, will showcase the evolution of characters, events, and alien races from Archer's time to Kirk's time, including the Orions, Klingons, Andorians, Tellarites, Tholians, the Gorn, Surak and more! From the other side of reality, comes In a Mirror, a 9-card aset focusing on the crew of the Mirror Universe Enterprise. Rounding out the chase sets is a 9-card Archer In Action set found one per box.

Fans and collectors will also be able to store their collections in a custom designed collector's album which contains an exclusive autograph card of Lee Arenberg as Gral and an exclusive promo card. 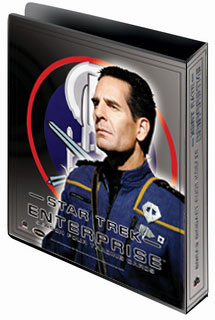 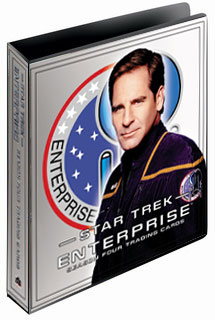