10 years ago, the Star Trek Universe boldly went where no previous Star Trek show had gone before. At the edge of the alpha quadrant a previously occupied Cardassian mining station awaited its new commander and federation crew. In the seven years that followed fans were treated to what many feel was the most dramatic of all the Star Trek series. Today, Rittenhouse Archives captures all of the drama, the conflict, the love and the war of Star Trek: Deep Space Nine in one huge 189-card set covering all 176 original episodes! 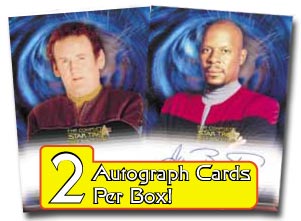 Fans and collectors alike will find everything they could hope for and more in this value packed series. For the first time ever, Colm Meaney who played Chief Miles O'Brien on Star Trek: The Next Generation and then on Star Trek: Deep Space Nine has agreed to sign his first official autograph card for any Star Trek series. Joining Mr. Meaney will be many of his fellow cast members including Michael Dorn (Lt. Worf), Avery Brooks (Captain Sisko), Armin Shimerman (Quark), Nana Visitor (Kira Nerys), Terry Farrell (Dax) and more! Another aspect of Deep Space Nine that drew fans to the show was the great support cast members many of whom have also agreed to sign including: Wallace Shawn (Grand Nagus Zek), Jeffery Combs (Weyoun), J. G. Hertzler (General Martok), William Sadler (Sloan) and more! These exciting autograph card can be found 2 Per Box! 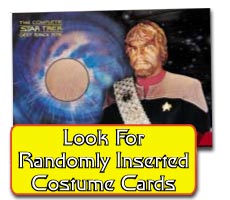 Also in this series will be the first ever Deep Space Nine costume cards. This 5-card subset will contain costume material from show worn costumes of Lt. Worf, Intendant Kira Nerys, Quark, Garak and Odo. Four of these cards will be inserted on an average of one in every 100 packs, while the Fifth costume card of Odo will be exclusive to the collectors binder. The collector's binders will also contain an exclusive P3 promo card of the U.S.S. Defiant and 25 plastic 9-pocket pages to hold your collection.

Other chase subset for this series include a 27-card Allies and Enemies set featuring many of the shows recurring characters inserted 1:3 packs. A 9-card Ships of the Dominion War set featuring the ships used during the show-defining Dominion War, a 6-card Altered Realities set showing the alternate versions of the crew from the Mirror, Mirror Universe and 10-card Deep Space Nine Gallery set.