Year Six of Stargate SG-1 saw our heroes, including the newest SG-1 member Jonas Quinn, face a new and powerful enemy in the hands of Anubis, as well as the return of old ones including the Replicators, the Goa'uld Nirrti and treachery from within their own government. 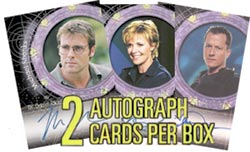 The excitment continues in the chase sets staring with Behind-the-scenes with Brad Wright. Executive Producer Brad Wright will be providing some exclusive behind-the-scenes information on nine of his most memorable shows from season 6. These cards can be found one in every five packs. Every trip throught the Stargate carries with it the danger of the unknown and the potential that someone may not make it back. A nine card In The Line of Duty chase set, found one in every ten packs, will showcase the countless times Colonel O'Neill has placed his life on the line for his country and the price he has paid. 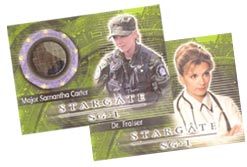 This set will also feature the first Gallery cards of the members of SG-1. These cards will be found one per box and feature Colonel Jack O'Neill, Major Samantha Carter, Teal'C, Dr. Daniel Jackson, Jonas Quinn and General Hammond.

No Stargate SG-1 set would be complete without "From The Archives" costume cards and this set will feature four authentic screen worn costumes from Major Carter, Jonas Quinn, Dr. Fraiser and General Hammond inserted one in every 120 packs.

A new official Stargate SG-1 Season 6 Collector's Album will also be available, and each album will come complete with 12 plastic sheets and an exclusive costume card from Richard Dean Anderson as Colonel Jack O'Neill as well as an binder exclusive P3 promo card.