90-Card Base Set featuring memorable quotes and moments from each of the first 10 classic Star Trek films!

Each The Quotable Star Trek Movies Trading Cards will contain 3 AUTOGRAPH CARDS! More than 30 different autograph cards, including signers from each of the first 10 classic Star Trek movies. 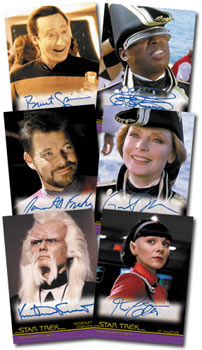