A year of change within the Stargate program as General Laundry takes over Stargate Command and a young eager former fighter pilot Lt. Colonel Cameron Mitchell takes over as commander of SG-1. Colonel Mitchell must re-assemble SG-1 to face a threat even greater than the gou'ald. An ancient enemy of the long gone Ancients, the Ori have return and seek to spread their word across the galaxy. Those who do not bow down and convert are destroyed! In March, remember all of the great adventures, the sacrifices and new discoveries with Stargate SG-1 Season 9 Trading Cards.

Each 40 pack box will contain 2 Autograph Card and 1 Costume or Relic(Prop) Card.

Signers included so far are: 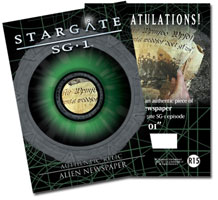 This series also features three all-new Stargate SG-1 Relic cards featuring pieces of actual show props. Each card will be individually numbered for added collectability. We have gathered an impressive assortment of props including: Costume cards include costumes worn by an amazing selection of cast and key guest stars including: 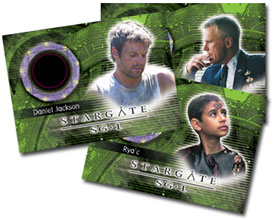 The excitement continues in the chase sets:

A new official Stargate SG-1 Season 9 Collector's Album will also be available, and each album will come complete with 12 plastic sheets and an exclusive dual costume card from Cronus in the episode "Double Jeopardy" as well as an binder exclusive P3 promo card featuring Teal'c.