With the new threat of the Replicators, old enemies become new alies for the Atlantis crew. Their mission continues as friends are lost and new ones are found. This all-new 81-card series captures the excitement and adventure of Stargate: Atlantis Seasons Three and Four, with all-new images and complete plot synopses.

Each of box of our Stargate: Atlantis Seasons Three and Four Trading Cards will contain TWO autograph cards and TWO costume cards.! Autographers for this set include : 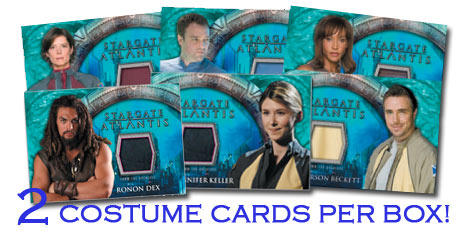 Rounding out this set are a number of chase subsets including: