Hidden deep in the Antarctic, the Stargate SG-1 team has discovered a long forgotten outpost base of the Ancients, the creators of the Stargates. There they discovered a new Stargate that connects to an entirely new network of gates that extends out of our known galaxy and into the Pegasus Galaxy. Dr. Elizabeth Weir, hand picked by the President of the United States, has assembled an elite team to explore — for the first time — this new galaxy.

This is the foundation for the Stargate SG-1 spin-off show Stargate: Atlantis which debute last July on the SciFi Channel and returns on July 15th, 2005 for its second season. This September, Rittenhouse Archives will bring collectors the first full series of trading cards on this hugely successful sci-fi series.

Each of box of our Stargate: Atlantis Season One Trading Cards will contain one autograph and one costume cards! Autographers for this premiere set include show stars Joe Flannigan as Major Sheppard and Paul McGillion as Dr. Carson Beckett. Additional signers include many of the show recurring guest stars including:

To add to the excitment of this set, each box will also contain one costume card. Included in this set are over a dozen different costume cards from both show stars and guest stars including Rounding out this set are a number of chase subsets including Each case of Stargate: Atlantis Season One Trading Cards will also include an exclusive autograph card case topper signed by Erin Chambers as Sora

Fans and collectors will also be able to store their collections in a custom designed collector's album which contains an exclusive autograph card of Alan Scarfe as Chancellor Druhin and an exclusive promo card. 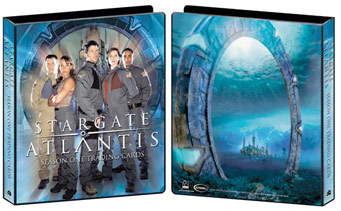