The highly Emmy-nominated series "Six Feet Under" will begin its fourth seasons in June. One marriage has come to a tragic end, another is beginning, and a third is on the rocks. At Fisher & Diaz, lives are in flux, as Nate, David, Ruth, Claire and Rico struggle to find their way.

Wrapping its third season last June, SIX FEET UNDER was created by Alan Ball (winner of the Best Original Screenplay Oscar® for "American Beauty"). Using dramatic irony and dark, situational humor, the show approaches the subject of death through the eyes of the Fisher family, who own and operate Fisher & Diaz Funeral Home in Los Angeles.

For those fans that haven't yet caught on to this addictive TV series from HBO, Rittenhouse Archives will help bring you up to speed on all of The Player and The Relationships this summer with our Six Feet Under Seasons 1 & 2 trading cards. The 81-card set will cover all 26 episodes from the first two seasons with complete plot synopses and more than 200 photos. 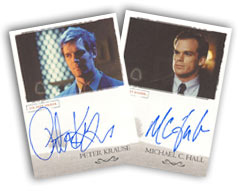 Collectors will be please to discover that under each box lid are 40 packs of cards and a guarantee of 3 autograph cards per box. Signers for this first series include show stars Peter Krause (Nate Fisher), Michael C. Hall (David Fisher), Joanna Cassidy (Margaret Chenowith), and Julie White (Mitzi Dalton-Huntley). Also signing are a number of recurring guest stars including Nicki Micheaux, David Norona, Joel Brooks, Tim Maculan and Eddie Jemison. Many of you may recognize Eddie Jemison who was one of the stars of "Ocean's 11" and will be in the sequel "Ocean's 12".

A new official Six Feet Under Seasons 1 & 2 Collector's Album will also be available, and each album will come complete with 12 plastic sheets and an exclusive autograph card of Marina Black as Parker as well as an binder exclusive P3 promo card.