Billionaire industrialist and genius inventor, Tony Stark, is kidnapped and forced to build a devastating weapon. Instead, using his intelligence and ingenuity, Tony builds a high-tech suit of armor and escapes captivity. When he uncovers a nefarious plot with global implications, he dons his powerful armor and vows to protect the world as Iron Man!
On April 30th, Rittenhouse Archives will release its Iron Man Movie Trading Cards, the perfect companion to what will be one of the hotest and high-tech movies of 2008! Each box of this set will feature 2 Super-Collectable Cards Per Box! including Autograph cards, Sketch Cards and/or Costume Cards.
Signers so far for this set include: Costume cards will feature authentic screen worn costumes from the movie's main characters including Tony Stark, Jim Rhodes, Pepper Potts, Obadiah Stane, Yinsen, Raza and Christine Everhart!

Also randomly inserted will be Iron Man sketch cards. There will be two different styles of sketch cards, one featuring the movie version of Iron Man and the other the comic book version.

Artist for this series include:
Rounding out the chase cards are several exciting sets including : Each case will come with an exclusive autograph card signed by Larry Leiber, script writer for "Tales of Suspense #39" and co-creator of Iron Man. 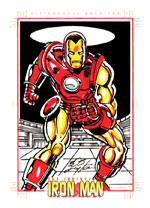