This fall Rittenhouse Archives presents the first ever trading card set to focus entirely on the marvel comic book series, The Avengers. This 81-card set will focus on the major events of the Avengers comics starting at the begining in 1963 and leading up to the present day with a tie-in to latest story line "Civil War".

Each box of this ground-breaking series will contain ONE hand-drawn and colored Sketch Card, a first for any trading card series! So far we have lined-up more than 40 artists. Artists include: 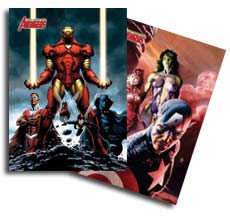 The number of chase subsets include:

For every 2 cases purchased, you will received an "Cut Archive Card", another industry first. Each card will feature a piece of one of the first 10 issues of The Avengers comic.

For every 6 cases purchased, you will receive an one-of-a-kind hand-drawn and colored sketch card by artist Cat Staggs on an oversize 5"x7" sketch board.


Fans and collectors will also be able to store their collection in a custom designed collector's album which contains an exclusive autograph card signed by Roy Thomas who wrote for over 70 issues of the Avengers and an exclusive promo card. 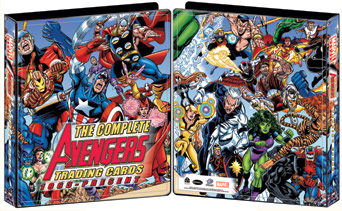 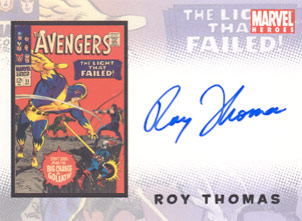