Bond is Back! In February 2006, Rittenhouse Archives will release James Bond: Dangerous Liaisons Trading Cards, the next set in our sold-out line of trading cards based on the legendary spy.

Rittenhouse has done it again by bringing collectors top signers from the Bond Universe. Ursula Andress, the FIRST Bond Girl on her first autograph card for ANY Bond set.

Each box in this new daring series will contain TWO AUTOGRAPH CARDS with signatures from:

This set will also feature the return of the fifteen new BOND GIRLS ARE FOREVER CARDS and twenty new BOND VILLAINS chase cards as well as the new addition of THE ART & IMAGES OF 007 CARDS where each of the 20 cards is printed on canvas stock and numbered to 500 each!

An exclusive James Bond: Dangerous Liaisons Trading Cards collectors album will also be available and contains 15 plastic sheets plus an exclusive autograph card of George Baker as Sir Hilary Bray from "On Her Majesty's Secret Service". 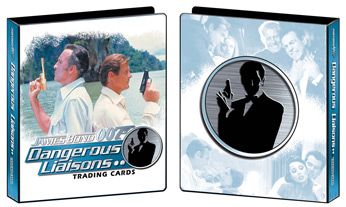