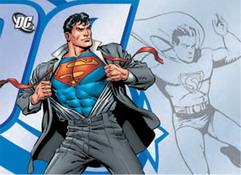 This September Rittenhouse Archives presents the first DC Comics Trading Card Set to feature SUPERMAN, BATMAN, WONDER WOMAN, GREEN LANTERN, FLASH, AQUAMAN, and other legendary DC characters as they have appeared in comic books from the 1930s to the present! This limited product run of 10,000 boxes will include a stunning 50-Card Base Set will feature UV-etch printing to bring each character's rich history to life!

Each box of this ground-breaking series will contain ONE hand-drawn colored Sketch Card - a first for any DC trading card series! There are 50 artists included in the product to date, including:


Look for these Insert Sets:

Each case includes an exclusive autograph card signed by Denny O'Neil. Denny O'Neil's history as a writer for DC Comics began in 1968 and he is known for the heavy influence he had on reshaping BATMAN, GREEN LANTERN and GREEN ARROW. O'Neil also created the infamous Batman villian RA'S AL GHUL.

For every 3 cases purchased, you will receive a one-of-a-kind hand-drawn regular sized sketch card from industry legend Nick Cardy or Luis Dominguez.

Luis Dominguez is an Argentine artist, who has worked a lot for American horror and mystery comic books in the 1960s and 1970s. Between 1963 and 1970 has was affiliated with the Union Studio in Latin America. He did back-up features for Charlton and drew for many of the company's 1960s war and western titles, such as 'Cheyenne Kid', 'Fightin' Marines', 'Billy the Kid' and 'Outlaws of the West'. From 1967 through the late 1970s, he did a lot of work for Gold Key titles like 'Ripley's Believe it or Not', 'Boris Karloff Tales of Mystery', 'Grimm's Ghost Stories', 'The Twilight Zone' and 'UFO Flying Saucers'. Then in the 1970s, he also began working for DC, illustrating for 'House of Mystery', 'House of Secrets', 'The Witching Hour' and 'Jonah Hex'.

(Due to an illness Murphay Anderson is unable to participate in the project. We wish him a speedy recovery.)

For every 9 cases purchased, you will receive a one-of-a-kind hand-drawn and colored sketch card by artist Cat Staggs or Mark Spears on an oversized 5"x7" sketch board.

Fans and collectors will also be able to store their collection in a custom designed collector's album which contains an exclusive autograph card signed by Joe Kubert as well as an exclusive promo card. Kubert's first work for DC Comics, where he would spend much of his career and produce some of his most notable art, was penciling and inking the 50-page "Seven Soldiers of Victory" superhero-team story in Leading Comics #8 (Fall 1943). Kubert served as DC Comics' director of publications from 1967-76, when he left to found the Joe Kubert School of Cartoon and Graphic Art. 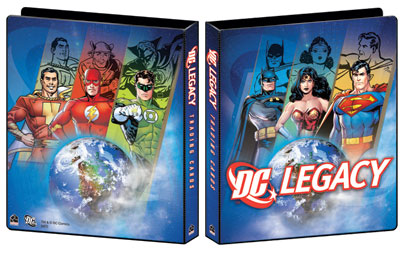 All Characters and related elements are trademarks of and © DC Comics.(s07)