This has all happened before and it will happen again. The Cylons were created by man. They Rebelled. Forty Years later they came back. They evolved. Eleven models are know. One will be revealed.

Relive the action, the drama, the struggles and the victories of the final season with Rittenhouse Archive's Battlestar Galactica Season Four trading cards. Each box will contain TWO autograph cards and TWO relic cards as well as at least one 63-card set covering all 20 episodes from the fourth season.

Rittenhouse Archives has put together an impressive list of autograph card signers, including key stars and guest stars. 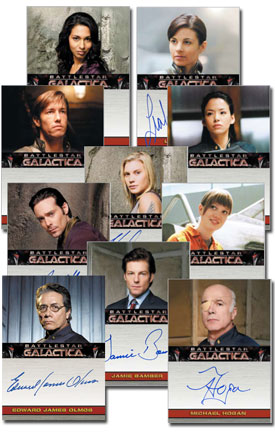 An exclusive collector's album will also be made available for Battlestar Galactica Season Four Trading Cards and will come with an exclusive promo card.