There are those who believe... that life here... began out there. Far across the universe. With tribes of humans... who may have been the forefathers of the Egyptians... or the Toltecs... or the Mayans... that they may have been the architects of the Great Pyramids... or the lost civilizations of Lemuria... or Atlantis... Some believe that there may yet be brothers of man... who even now fight to survive... somewhere beyond the heavens. 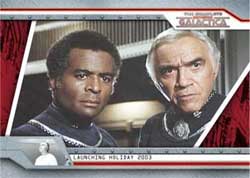 Rittenhouse Archives is pleased to announce that the lead stars of Battlestar Galactica, Richard Hatch and Dirk Benedict, will be signing autograph cards for this upcoming series. 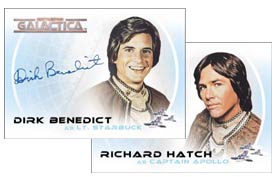 Besides autograph cards, fans can chase after several exciting levels of chase cards including:

Galactica 1980 - a 20-card set covering the 10 episodes of the short-lived second Battlestar Galatica series featuring many of the original cast including Lorne Green as well as new cast members Kent McCord and Barry Van Dyke. 1:3 packs


SketchaFEX™ - several artist have lent their talent and imagination to this series and put their pencils, pens and colors to cards to produce some of the most exciting sketchaFEX™ cards to date. 1:120 packs. 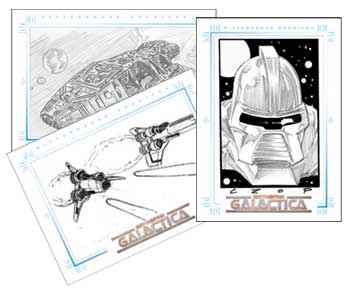 An exclusive collector's album will also be made available for The Complete Battlestar Galactica Trading Cards and will come with 12 9-pocket plastic pages, a bonus promo card and an exclusive Commander Adama (Lorne Greene) costume card.