In their second year of exploration, the crew of the Enterprise NX-01 faced challenges none of them could have imaged. From time travel to the desolate future to T'Pol's infection of Pa'nar Syndrome, an incurable Vulcan disease, to the loss of family and friends to an encounter with a ship from the future to the unprovoked attack by the Xindi on Earth.

All of these events have brought changes to the crew of the Enterprise and Rittenhouse makes some changes too with an all new design to its Enterprise Season Two trading cards. Each exciting episode is captured on three cards with one large image on the front and two additional images along with episode synopsis on the back for a total of 9 images per episode. 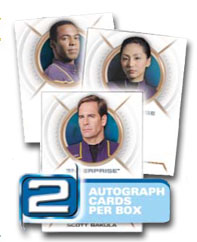 Building on last years exciting chase cards, the season two series will expand on the First Contact chase cards highlighting all of the new alien races that Captain Archer and his crew encountered during their 2nd year out including the Borg, Tellarites, Arkonians and Kreetassans among others. Also included in this series will be 22nd Century Vessels and Enterprise Gallery. The 22nd Century Vessels cards will utilize Rittenhouse Archives new "EtchaFEX™" technology to showcase the alien vessels that were encountered in season two including Tellarite Ship, Vissian Stratopod, Arkonian Ship, Retellian Cargo Ship, Borg Modified Transport and others.

The Enterprise Gallery cards were the number one thing fans requested Rittenhouse to include in this years set and we didn't disappoint them. There will be seven "film clip style" gallery cards, one for each crew member that can be found one per box.

Each box of Enterprise Season 2 Trading Cards comes with 40 packs with 8 cards per pack. Each pack will contain 7 regular base cards and 1 parallel card to the base set. An exclusive custome desgined collector's album will also be made available. Each album comes with 12 plastic 9-pocket pages, an exclusive T'Pol promo card and an additional exclusive card to be announced soon.