Believe it or not, this is the very first set EVER to encompass all 79 episodes of the classic Star Trek in a single card series. Rittenhouse Archives has captured the incredible imagery from all 79 episodes and placed it on foil-stamped canvas stock. Each images has been "artified" to give it a unique look that complements the paper it is printed on. 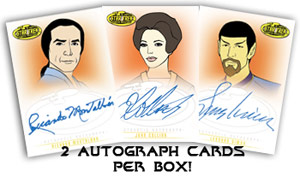 Also included in this set is a unique series of hand-drawn sketch cards featuring imagery from each of the show's 29 first-season episodes. Artist for this series include:

These very limited sketch cards will be inserted at an average rate of one in every 2 boxes. 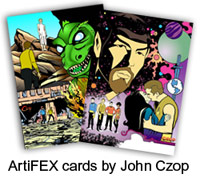 Fans and collectors will also be able to store their collections in a custom designed collector's album which contains an exclusive autograph card of Arlene Martel as T'Pring and an exclusive promo card.