Prepare to be beamed aboard one of the most interesting Star Trek trading card sets in years, The Complete Star Trek: Animated Adventures Trading Cards! There has never before been a full series of cards dedicated to this all-time classic TV cartoon series, which aired in 1973-74. This 198 card series will cover all 22 episodes, with 9 cards per episode printed on 20 point stock with high "wet" gloss UV coating. 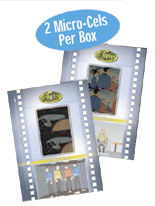 Expanding this huge base set will be several chase levels to highlight the true uniqueness of this animated show. First is the James Doohan Tribute found one in every 4 packs which features all of the great characters that Mr. Doohan provided voices for. Next is the The Enterprise Bridge Crew found one in every 8 packs. Sure to be a hit is the Captain Kirk IN MOTION™ lenticular cards found one in every 20 packs. The most unique chase card will be the Star Trek Micro-Cels featuring authentic pieces of film. There are 22 different cards, one for each episode and each card will contain two unique pieces of actual series film. No two card will be exactly alike. Collectors will find two of these cards in their 40 pack count boxes. 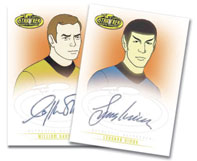 As an added bonus, each box will have one of five unique die-cut shaped CD-ROMS featuring exclusive Star Trek: Animated content including screen savers, wall papers, history of the show and an exclusive interview with DC Fontana. These CD-ROMS will not be available anywhere else.

A must for any Star Trek Connoisseur!!!!