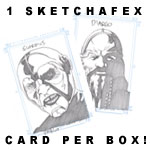 The 72-card base set will chronicle the episodic adventures of John Crichton and the rest of the show's cast of characters. As in the first two series, there will be 3 cards per episode in the base set, covering all 22 episodes. In addition to the autograph cards and sketchaFEX cards, Rittenhouse will continue with the fan favorite bonus levels, including an exhaustive, 22-card "Behind-the-Scenes" bonus set penned by David Kemper (who promises lots of previously untold and funny anecdotes from each episose), a 22-card "The Quotable Farscape" bonus set!

New for this series will be the "Revenging Angel Animation Cels". This 18-card chase set printed on plastic will feature some of the great cartoon animation that was done for the episode "Revenging Angel". Fans can look forward to seeing some of their favorite characters like John Crichton, D'Argo and Scorpius in animated cartoon style!

Because fans have demanded it, we have added two costume cards to the Season 3 set. The first is of the "Mambo" shirt worn by the neural clone of Scorpius known as Harvey in the episode "Crackers Don't Matter". Below are some images of the front and back of the shirt. The other costume is from Xhalax Sun. Insertion rates of the costume cards have not yet been determined. 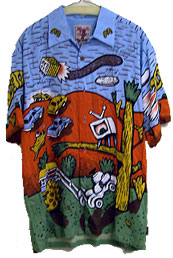 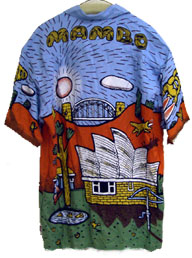 Each box of Farscape Season Three will contain 40 packs with a suggested retail price of $2.00 per pack and $80.00 per box. Each pack will contain 9 cards.

The will also be a custom designed collector's album which will retail for $39.99, and contain an exclusive autograph card from Jonathan Hardy (Voice of Rygel).