This fall Rittenhouse Archives will release Justice League of America Archives, an historical retrospective on the legendary DC Comics team. This set will cover the team's history from 1960 to 1969, starting with their first mission together in "Brave and the Bold" #28. Each box of Justice League of America Archives trading cards will feature a hand-drawn, hand-colored sketch card from one of 39 different artists. This series is limited to just 6,000 boxes! 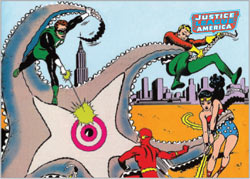 Sketch Artists (Quantities) featured in this set include: Look for these Insert Sets: Each case includes an exclusive autograph card signed by Murphy Anderson. Murphy Anderson was the inker and penciler on many of the first JLA covers.

For every 18 cases purchased, you will receive a Justice League of America Archives Archive Box containing one sketch card from each of the artists inserted into the packs for a total of 39 different sketch cards!