Winner of the prestigious Peabody award for distinguished achievement in television, Battlestar Galactica continues to draw rave reviews from fans and critics alike. Relive the action, the drama, the struggles and the victories of this critically acclaimed show with Rittenhouse Archive's Battlestar Galactica Season Three trading cards. Each box will contain TWO autograph cards and one costume card as well as at least one 63-card set covering all 20 episodes from the third season.

Rittenhouse Archives has pulled out all of the stop to acquire signatures from the entire cast. Autograph signers found in the packs include: 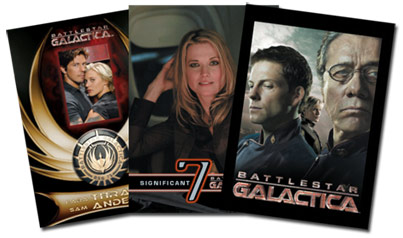 An exclusive collector's album will also be made available for Battlestar Galactica Season Three Trading Cards and will come with an exclusive promo card.