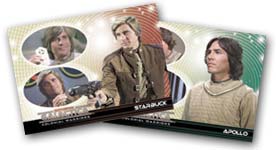 Fleeing from the Cylon tyranny, the last batttlestar, Galactica, leads a rag-tag fugitive fleet on a lonely quest -- a shining planet known as "Earth".

In January 2006, Rittenhouse Archives will return to the Battlestar Galactica with Battlestar Galactica: Colonial Warriors Trading Cards. This 72-card series will focus on the men and women of the last known battlestar - the friendships, relationships and sacrifices the colonial warriors made in the continual struggle against the Cylons.

Each box will contain 40 packs and each pack will contain five cards. This all-new series will contain 1 hand-signed autograph card and 1 costume card per box!.

Building on the exciting list of autographers from our previous release, we have added several new series stars and guest stars including:

Inserted into each box of Battlestar Galactica: Colonial Warriors Trading Cards is a costume card featuring show worn costumes from most of the starring cast including Apollo, Starbuck, Adama, Boomer, Serina and Tigh.

To add to the excitment of the costume cards, we are also including four autographed costume cards signed by Richard Hatch (Apollo), Dirk Benedict (Starbuck), Herbert Jefferson, Jr. (Boomer) and Terry Carter (Tigh).

Besides autograph cards and costumes, fans can chase after several exciting levels of chase cards including:

1978 Expansion Set - a 54-card set that captures the nostagic look and feel of the 132-card set that was produced in 1978. The card number on these expansion cards will start with card 133 and just like the originals, the last 44 cards in the series will be a puzzled back. 1:8 packs


Casting Call - a 9-card set that will spotlight the actors of this classic TV scifi series. 1:20 packs 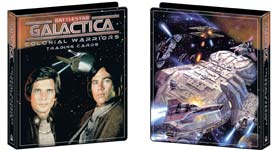 An exclusive collector's album will also be made available for Battlestar Galactica: Colonial Warriors Trading Cards and will come with 12 9-pocket plastic pages, a bonus promo card and an exclusive Lt. Athena (Maren Jensen) costume card.

Below are some images of the actual show-used costumes that were used in the creation of the costume cards for this series.