Forty years ago the U.S.S Enterprise began it's five year mission under the command of Captain James T. Kirk, and the face of science fiction television was forever changed. Five TV series and 10 films later, Star Trek celebrates it's 40th birthday, and Rittenhouse Archives will mark this spectacular occasion with Star Trek: 40th Anniversary Trading Cards. Like the TV shows this set honors, this series will be the ground-breaking as it will be the first trading card set to feature all five TV shows and all five captains in one collection!
Each box of this set will feature 2 Costume Cards with 40 costume cards found in the packs to celebrate the 40th Anniversary. Costumes cards in this series will feature costumes worn by many of the shows' stars and memorable guest stars including: 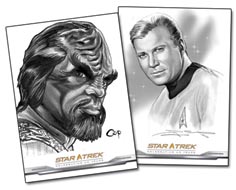 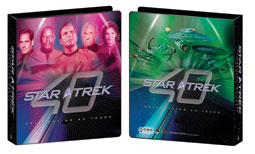 Fans and collectors will also be able to store their collection in a custom designed collector's album which contains an exclusive costume card of Neelix and an exclusive Captain Sisko promo card.


Below are images of the some of the costumes used for this set. More images will be posted when they become available.